Your Next Personal Assistant Could be a Drone

Imagine you’re a college student cramming for a test in your dorm room. It's getting late, and you realize you still need to make a trip across campus to pick up supplies from the school bookstore and find a bite to eat.

What if there was a way for the school supplies and food to be delivered right to your dorm – not by car or foot, but by drone?

One class that is part of the Vertically Integrated Projects (VIP) Program at the Georgia Tech Research Institute (GTRI) and Georgia Tech could soon turn that idea into a reality.

The class, called Experimental Flights, is developing a drone delivery network that would allow students on Georgia Tech's campus in Atlanta to place orders for items such as school supplies and food through a mobile app, and have a drone deliver those items to a secure locker station close to their dorm. The app would have a similar look and feel to the app used for popular ridesharing services and students could use it to view wait times for the next available drone, track their package, and receive a unique code to access their purchase.

Michael Mayo, a GTRI senior research engineer who is the lead instructor for the class, said his initial goal is to roll out the drone delivery network to students at Georgia Tech and then to consider other locations later on.

"We’ve been working on this kind of network for a couple of years now and have leveraged knowledge from a lot of different disciplines at Tech – including aerospace engineering, mechanical engineering, and computer science," Mayo said. "Success for this project would be for us to develop a fully-functional drone delivery network on Georgia Tech's campus that would serve as a model for future drone delivery networks across the country and world."

VIP is an education program supported by Tech and GTRI that allows undergraduate and graduate students to earn academic credit for working with faculty on projects they don't typically encounter in a classroom setting.

Student teams work closely with faculty advisors and graduate student mentors. Classes are held once a week, though team members usually hold additional meetings outside of class. Prospective students who are interested in joining the program can apply to a team that interests them on Tech's VIP website. 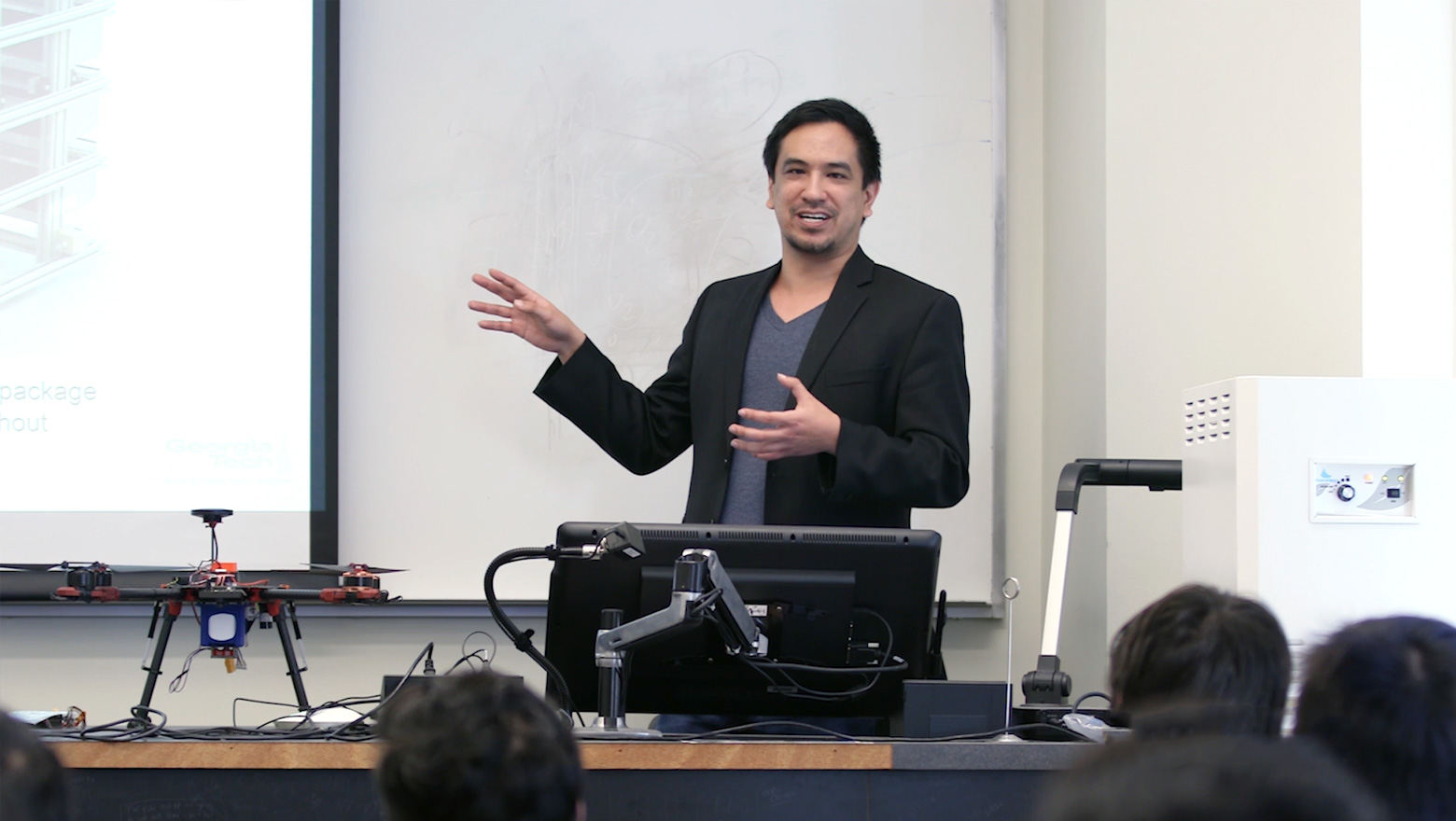 The Experimental Flights class attracts a diverse group of class years and majors.

For the spring 2022 semester, the course included 33 undergraduate students ranging from first years to fourth years with the following majors: aerospace engineering, mechanical engineering, electrical engineering, and computer science. Twenty-one of the 33 students took the class in a previous semester.

One of those students is Catherine Heaton, a fourth-year aerospace engineering major who has participated in the Experimental Flights class since the fall 2020 semester. Heaton said working with a diverse group of students has enabled her to apply the concepts she has learned from her major to solve real-world issues, while also gaining experience developing hardware systems that supports emerging technologies.

"I'm on our class' hardware team, so I help assemble all of the parts of the drone and also work a little bit with 3D software modeling," Heaton said. "There's a lot of new technologies coming out – whether it's drones, or other plane-related things – and they all have so much potential."

Another student, Tim Boyer, a third-year electrical engineering major who has also been a member of the class since fall 2020, said he most enjoys VIP's interdisciplinary focus and getting the chance to tinker with drones.

"I really enjoy working with mechanical engineering and computer science majors to make a project come together," Boyer said. "It's also great because I have always been interested in drones, so this class is a great outlet to play around with that kind of hardware."

VIP Programs are now active in over 40 universities, with more than 4,500 students participating per term around the globe. The entire Georgia Tech VIP program currently serves 84 VIP teams involving more than 200 faculty and over 1,500 students. GTRI has 13 VIP teams that involve roughly 40 faculty members.

Catherine Heaton (right) is a fourth-year aerospace engineering major who has participated in Experimental Flights since fall 2020. Heaton said she enjoys working with a diverse group of students to solve real-world issues (Credit: Christopher Moore, GTRI).

The cost of drones, batteries and other associated components continue to decrease, which makes the economics of this type of delivery system more and more favorable.

Mayo's class has assembled a few drone prototypes with the help of drone assembly kits and 3D printing.

The cost to create one drone is under $1,000, and each prototype can currently carry packages that weigh up to 2 pounds, according to Mayo.

"The cost of drones, batteries and other associated components continue to decrease, which makes the economics of this type of delivery system more and more favorable," Mayo said.

Beyond package delivery, drones are useful in disaster relief settings when organizations need to send goods to places with restricted access, and also in military settings to help ground troops collect key intelligence and not risking helicopter crews to deliver supplies.

The Experimental Flights class has successfully completed initial flight testing for their drones in a controlled environment that has been approved by the Georgia Tech Police Department and demonstrated the drones' ability to transport small packages. The class has also constructed a prototype package locker that can securely store multiple packages and that the drone can directly drop packages into.

The class assembled drone prototypes with the help of drone assembly kits and 3D printing. Each drone cost less than $1,000 to build and can carry packages weighing up to 2 pounds (Credit: Christopher Moore, GTRI).

The class is currently designing the mobile app for end users and a flight control center to manage drone operation. The path the drone takes through campus for each delivery will be automatically generated using an algorithm designed by the class. The algorithm has been designed to optimize the drone's flight path to ensure maximum safety by avoiding flight over people while also reducing delivery times when possible. Drones will fly themselves autonomously to their destination during normal operation.

Mayo noted a fully-operational drone would transmit real-time telemetry and live video streams to the flight control center at all times, and in the event of an emergency, a human operator would assume manual control of the drone. Packages will be secured with both an electromagnet and with the landing gear of the drone itself during transport to reduce the risk of a package becoming dislodged during flight. Rotor cowlings will be added to the drones to minimize the chance of human contact with the rotors – or a fanlike component that drones rely on for propulsion and control – during normal operation and in the event that a drone flies off its approved path.

Before implementing a drone delivery network on campus, the class would need to gain approval from campus administrators and the Federal Aviation Administration (FAA).

"Special preparation will also need to be made to get FAA approval to fly the drones beyond visual line of sight, which is a requirement for most drone operations," Mayo said.

Tim Boyer (pictured) is a third-year electrical engineering major who has been a member of Experimental Flights since fall 2020. Boyer said he enjoys VIP's interdisciplinary focus and tinkering with drones (Credit: Christopher Moore, GTRI).

Once the drone delivery system becomes fully operational, the only initial cost to students would be the items that they order, Mayo said. An additional delivery cost, similar to those for food delivery services such as DoorDash and Uber Eats, could be included later on.

Looking ahead, the class aims to perform flight tests where the drone would pick up a sample package and deliver the item to a locker station in one trip.

Mayo said he considers a collaboration between students and companies to be a win-win for both groups. Companies are able to build relationships with students who have in-demand skills and who could be hired as entry-level employees. Students, meanwhile, are able to receive feedback from experienced engineers and network with a company that could serve as a potential employment opportunity.

"There are so many advantages to VIP that extend well beyond the classroom," Mayo said.

Students have constructed a prototype package locker that can securely store multiple packages and that the drone can directly drop packages into (Credit: Christopher Moore, GTRI).