Celebrating Inclusive Excellence: Sharaé Meredith on the Power of Encouragement 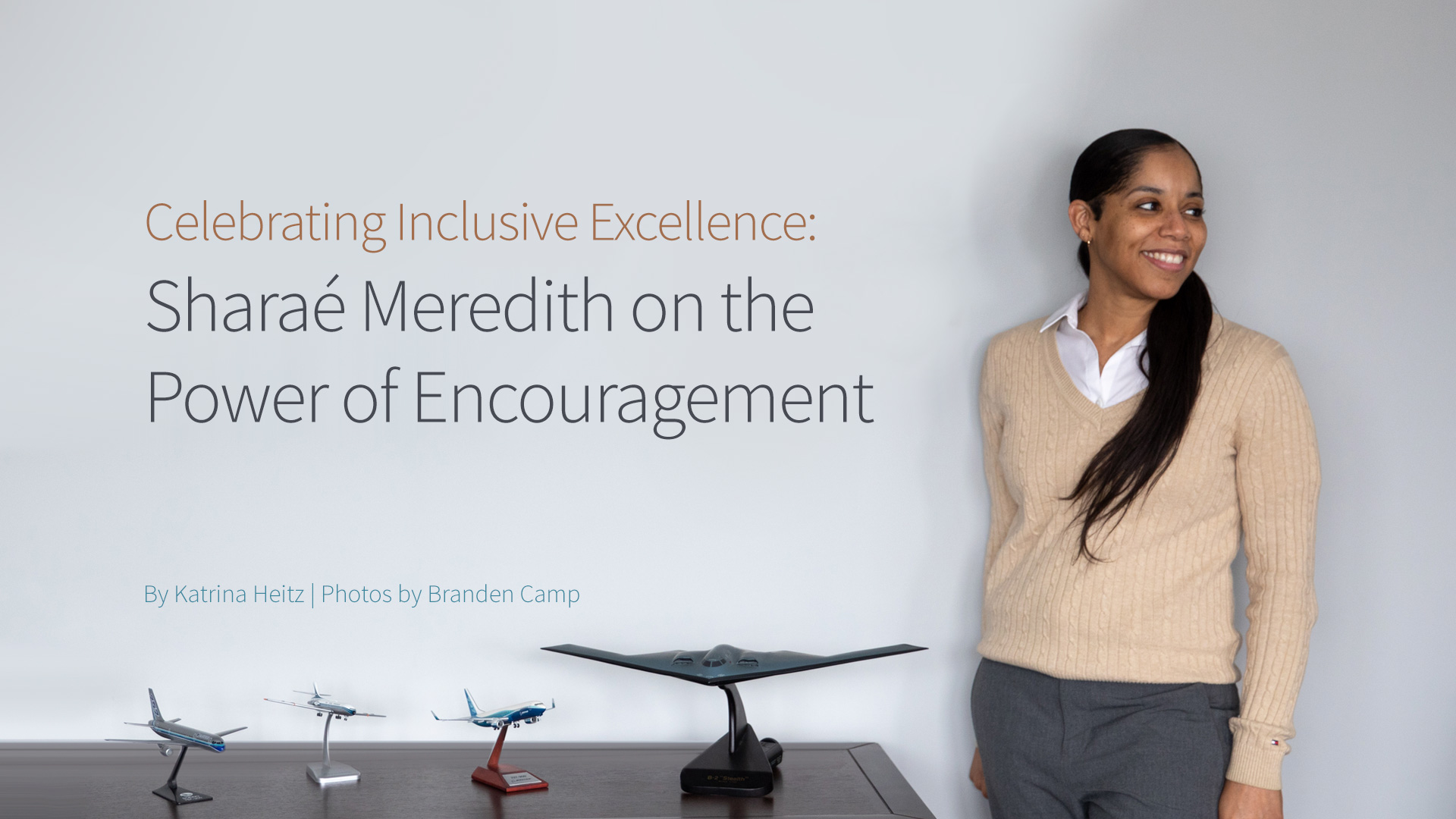 Initially, I had no intentions (of pursuing higher education) – I didn’t even know that was something that was feasible for me.

A little bit of encouragement can go a long way, helping people achieve higher levels of success that previously felt unachievable. That’s a lesson Sharaé Meredith, Ph.D., a senior research engineer at the Georgia Tech Research Institute (GTRI), has learned throughout her career.

Meredith, who has worked in GTRI’s Advanced Concepts Laboratory (ACL) for three years, believes all people will face obstacles in their personal and professional lives. Therefore, individuals and organizations must work to equip people with the ability to persevere. While Meredith has certainly faced adversity, encouragement from key people in her life has allowed her to overcome challenges and become a trailblazer in aerospace engineering.

Equipped with the knowledge of how powerful encouragement can be, Meredith strives to motivate and uplift others at GTRI and I Am B.E.A.U.T.I.F.U.L., a nonprofit organization dedicated to building self-esteem and leadership capability in girls and women.

The Power of Encouragement

As a child, Meredith found herself fascinated with planes. She wondered, “How could objects so big and heavy fly gracefully through the sky?” With her love of airplanes never fading, she elected to follow her passion for science and math by majoring in aerospace engineering at Tuskegee University.

During her studies, Meredith crossed paths with Professor Eric Sheppard, an individual who would greatly influence the course of her life.

“Initially, I had no intentions (of pursuing higher education) – I didn’t even know that was something that was feasible for me,” Meredith said. “(Professor Sheppard) ended up making the connection and gave me the push that I needed.”

Heeding Professor Sheppard’s encouragement, Meredith went on to achieve great success in higher education. Meredith received her M.S. from the Georgia Institute of Technology (Georgia Tech) in 2000 and her Ph.D. from Pennsylvania State University (Penn State) in 2016, both in aerospace engineering. 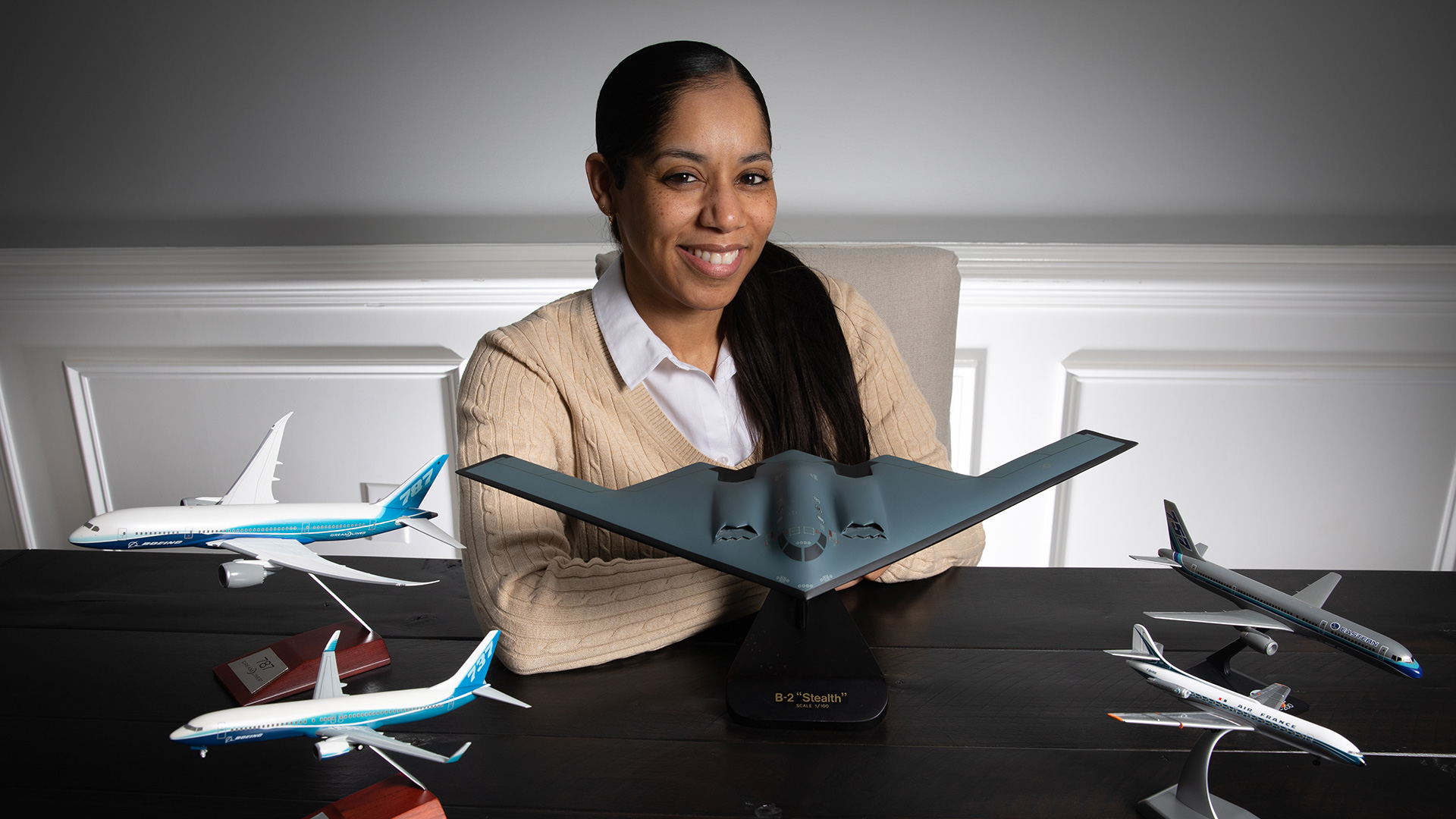 As Meredith departed from her undergraduate education at Tuskegee University, a historically Black university, she faced bias from a field that is largely comprised of white and male professionals. Meredith felt isolated as few people shared the same life experience as her, and it turns out she was not alone in her experience. A 2016 study conducted by the Society of Women Engineers suggested a specific gender and racial bias within the engineering profession. In light of the circumstances, Meredith was determined to overcome any obstacles that impeded her path. She remarked internally, “Challenge accepted!” as she forged ahead in her education and career.

In navigating the challenges associated with being both a woman and a person of color in engineering, Meredith once again met a person who believed in her and offered inspiration.

“Dr. Marilyn Smith in the aerospace department at Georgia Tech was absolutely phenomenal, in the sense that she was the only female professor who was in the department that I saw on a regular basis at that time,” Meredith said. “I had the opportunity to go and speak with her, and she certainly was a huge encouragement to me from the perspective of being a woman.”

Later, during a series of racial incidents at Penn State in the early 2000s, Meredith’s advisor served as a safe space for her. Regardless of what was happening in the community, Meredith said that “the aerospace department there was extremely warm, welcoming, and very protective.”

Moments of adversity in Meredith’s life allowed her allies to offer support in times of need.

Becoming a Trailblazer in Aerospace Engineering

Meredith persevered through each challenge she faced. After taking a break in her studies to work in the industry, she returned to Penn State and earned the distinction of becoming the first Black female Ph.D. graduate in aerospace engineering at Penn State in 2016. Furthermore, she was only the seventh female to complete the program. When reflecting on her experience, Meredith shared it brought her a sense of accomplishment, completing such a prestigious degree in an intensely strenuous field.

Along with that accomplishment, however, was a sense of sadness. While her accomplishment was a huge success, the fact that she was the first to achieve this distinction in the year 2016 revealed the barriers women and people of color face in science, technology, engineering, and mathematics (STEM). Meredith stressed the importance of making aerospace engineering more inclusive. 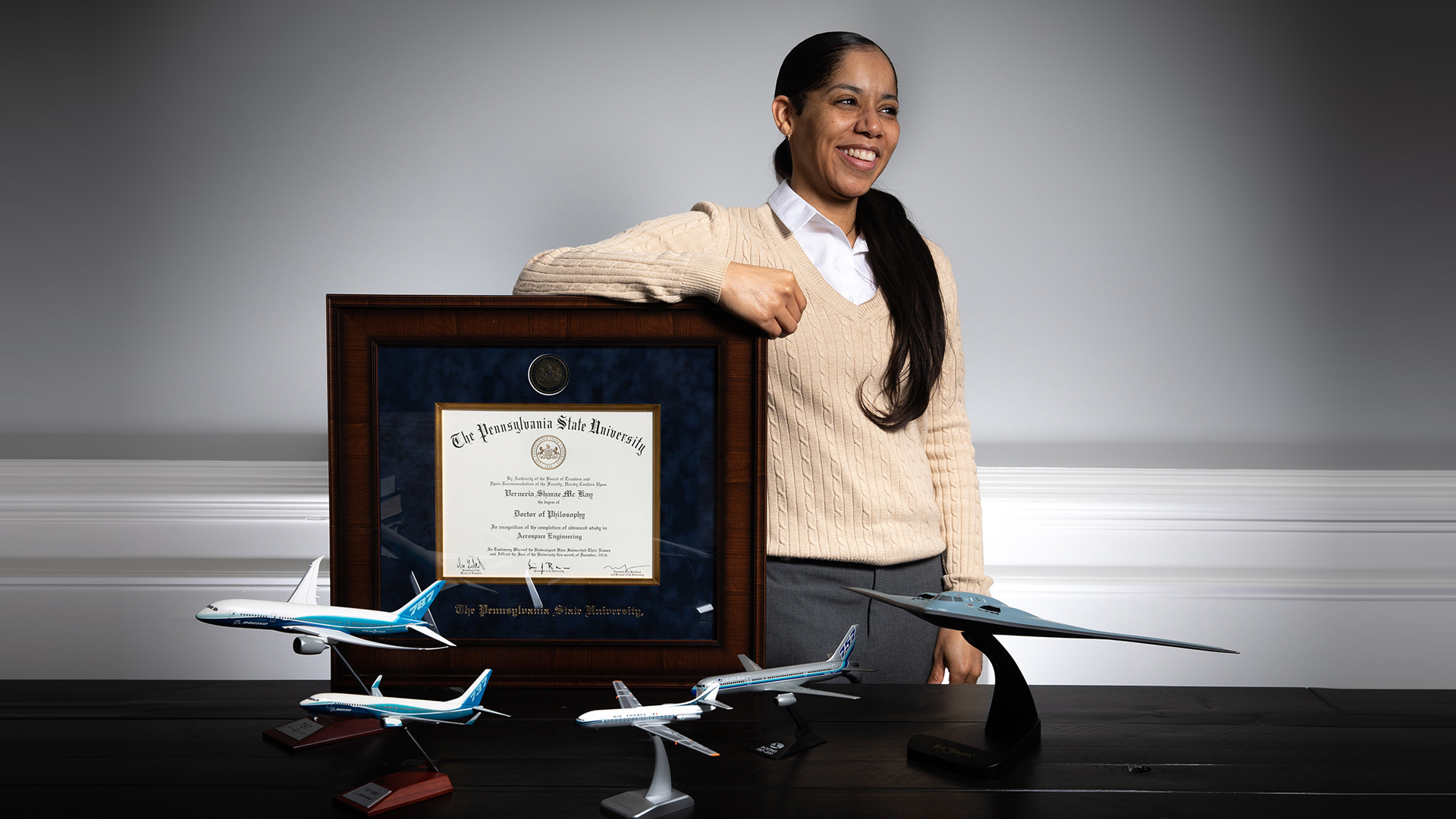 Assumptions are made that people are not interested (in STEM), while in actuality, individuals are just not given the opportunity.

“It’s a matter of exposure,” she said. “I think that reaching out to people outside of an area that is your comfort zone definitely is a benefit not just to them, but you as well. A lot of times, assumptions are made that people are not interested (in STEM), while in actuality, individuals are just not given the opportunity.”

Before GTRI, Meredith joined Lockheed Martin as a staff research scientist and worked there for 11 years. A couple of years after receiving her Ph.D., she began working at GTRI’s ACL. Meredith’s strong integration skills have been on display, allowing her to transition and find connections between multiple projects.

“I am more like water – I go with the flow and have a tendency to pick up different things and apply it at different areas,” she said.

She initially discovered this ability while working at Lockheed Martin, where her primary focus was in infrared technologies. Her expertise then began to expand to radio frequency (RF) technologies working on F-22 aircraft and then to acoustics, an area that tends to receive less emphasis in aerospace engineering. While helping her team catch up with the new projects, Meredith quickly realized her ability to adapt and integrate technologies was an asset.

Meredith’s ability to integrate projects and help technologies work together seamlessly complements researchers who dive deep into one specific task. At GTRI, Meredith’s work transitions between drones, countermeasures, war-gaming, and even analytics associated with psychological studies.

Mentoring the Next Generation

Meredith credits much of her success to those who have encouraged her. Now, Meredith turns to empower students and provide opportunities for all to learn about STEM.

People don’t have to wait until they are at the height of their career to encourage others. While still in her Ph.D. program, Meredith met an undergraduate student concerned about her next steps in life. Meredith encouraged the young woman to pursue higher education in a similar way Professor Sheppard had spoken to Meredith. A few years down the road, Meredith found that the student had completed her Master’s degree and wrote an acknowledgment thanking Meredith.

“I would not have expected to be a catalyst for somebody that early on,” Meredith said.

Now, Meredith is on the Board of Directors for I Am B.E.A.U.T.I.F.U.L. (IAB), a nonprofit organization dedicated to building self-esteem and leadership capabilities in girls and women of all ages. Through interactive learning experiences, the IAB team conveys that females are Brave, Energetic, Assertive, Unique, Tenacious, Important, Fabulous, Unequaled, and Loved (B.E.A.U.T.I.F.U.L.). In her role, Meredith coordinates the STEM activities and acts as a liaison between IAB and GTRI.

“With IAB, a lot of these girls would not have considered something outside of what they see their parents do,” Meredith said. “Giving them exposure to a college campus and other engineering disciplines opens their eyes and lets them know what is available to them.”

Regardless of the situation, there are always opportunities to pour into others’ lives, providing them with the encouragement they need to succeed. In line with that idea, Meredith has high hopes for the future.

“I want to continue to grow and develop as an engineer — continue to sharpen my abilities as well as seek out a leadership position,” said Meredith.

After seeing the positive effects of encouragement in her life, Meredith plans to continue expanding STEM outreach efforts at GTRI, exposing new students to the possibilities and opportunities in various engineering disciplines.

STEM@GTRI is the Georgia Tech Research Institute’s K12 outreach program. Funded by the State of Georgia, the mission of STEM@GTRI is to inspire, engage, and impact Georgia educators and students by providing access to experts in the fields of science, technology, engineering, and math (STEM).