Researchers at the Georgia Tech Research Institute (GTRI) come in a wide range of disciplines — including materials science, electromagnetics, robotics, and cybersecurity. This makes it easy for employees to find others in their niches and help each other sharpen their skills.

For example, in the Cybersecurity, Information Protection, and Hardware Evaluation Research (CIPHER) Laboratory, researchers use hackathon or capture-the-flag (CTF) events to improve their skills and increase team collaboration

Nearly 20 GTRI researchers competed in the U.S. Navy’s HACKtheMACHINE event held March 23 to 26 this year. Around 500 people competed worldwide. The event was mostly virtual, but a handful of GTRI researchers collaborated in person while following social distancing guidelines.

“I really want to create a space with individual offices that you can retreat to if we need quiet or you just don’t feel safe,” said Senior Research Engineer Chris Roberts, who leads the Embedded Cyber Techniques branch at CIPHER. “We have that collaborative area to come together and bounce ideas off of each other and go to the whiteboard if we need to.”

The credit goes to Roberts for informing CIPHER about HACKtheMACHINE and getting his team involved in the event. He saw this as an opportunity for professional development and to discover future team leaders.

“I’m really looking forward to seeing who rises to the call,” Roberts said before the event. “I love seeing people grow.”

During the event, GTRI participated in Track 1 of the competition with two separate teams. One team finished in second place, and the other landed in 14th place. Facing off against other teams, the programmers attempted to hack commercial maritime electronics to test their vulnerabilities.

This year marks the sixth iteration of HACKtheMACHINE. After each event, the U.S. Navy reviews how their systems were able to withstand the test before adapting their systems accordingly. Along with helping improve national security, winners can earn up to $15,000. The second place prize was $10,000.

Despite the prize on the line, Research Engineer Allen Stewart looked forward to sharpening his skills and collaborating with his teammates in an environment that may be more laid-back than work.

“It’s a fun opportunity that is little bit lower pressure but little more entertaining version of what we do at work,” he explained.

Stewart believes the event exposes him to new technologies and tasks outside of his comfort zone, helping him to stay afloat in this ever-changing field.

“I think it is really healthy for people to be stretched,” said Roberts, who is Stewart’s supervisor. “[The hackathon] is a very safe environment to be stretched because if you fail, it’s not as big as a deal as if you fail on a sponsored project. It’s going to force you to be exposed to areas of research that you’re not familiar with.”

Roberts believes that kind of discomfort will make his team members better engineers.

“You will be a better engineer at the output of [a hackathon],” he said. “Every one you do.”

Gaining more insight into the challenges the Navy faces allows GTRI researchers to improve their service to and work sponsored by the Department of Defense. 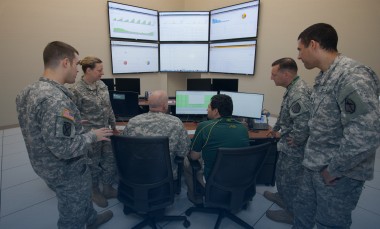 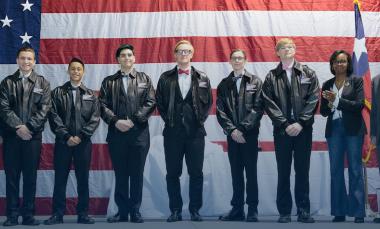 The Georgia Tech Research Institute's Cyber Technology and Information Security Laboratory (CTISL) and the San Antonio field office presented leather bomber jackets to the winning CyberPatriot team at the Mayor’s Cyber Cup Luncheon for the third year in a row.
06.20.2016