The Institute of Electrical and Electronics Engineers (IEEE) announced that the Georgia Tech Research Institute (GTRI) is the Supporting Friend of IEEE Member and Geographic Activities (MGA) Award recipient.

IEEE is the world’s largest technical professional organization that is dedicated to advancing technology, with a core purpose of fostering technological innovation and excellence for the benefit of humanity. The Supporting Friend of IEEE Member and Geographic Activities Award recognizes individuals, organizations, and divisions of organizations, who encourage and support IEEE activities and/or volunteerism through their practices.

GTRI has been a “supporting friend” of IEEE since its inception in 1934. IEEE records dating back to the 1970s document GTRI, formally named the Engineering Experiment Station (ESS), as holding leadership roles within the organization as IEEE National Lecturers, which included Dr. H. A. Ecker and Dr. Jim Wiltse in 1975 and 1979, and committee members for the Radar Systems Committee in 1972. Currently, a multitude of researchers across GTRI have achieved IEEE senior membership and continue to serve in high-level IEEE volunteer positions including as director-elect held by Jill Gostin from 2018-19, a principal research scientist at GTRI’s Sensors and Electromagnetic Applications Laboratory (SEAL).

In a letter received by the GTRI Awards Council, Vice President of the IEEE Member and Geographic Activities and Chair of the IEEE Member and Geographic Activities Board, Francis B. Grosz, Jr., commended GTRI for “outstanding and continued support to operations of the IEEE Atlanta Section.” A plaque was awarded to GTRI with the engraving, “For supporting and promoting IEEE professional activities, encouraging active participation by all employees, and contributing as leaders at many levels of the IEEE.”

GTRI is the nonprofit, applied research division of the Georgia Institute of Technology (Georgia Tech). Founded in 1934, GTRI has grown to more than 2,400 employees supporting eight laboratories in over 22 locations around the country and performs more than $640 million of problem-solving research annually for government, the state of Georgia, and industry partners. 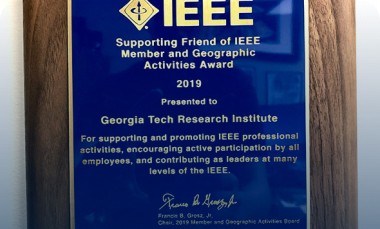